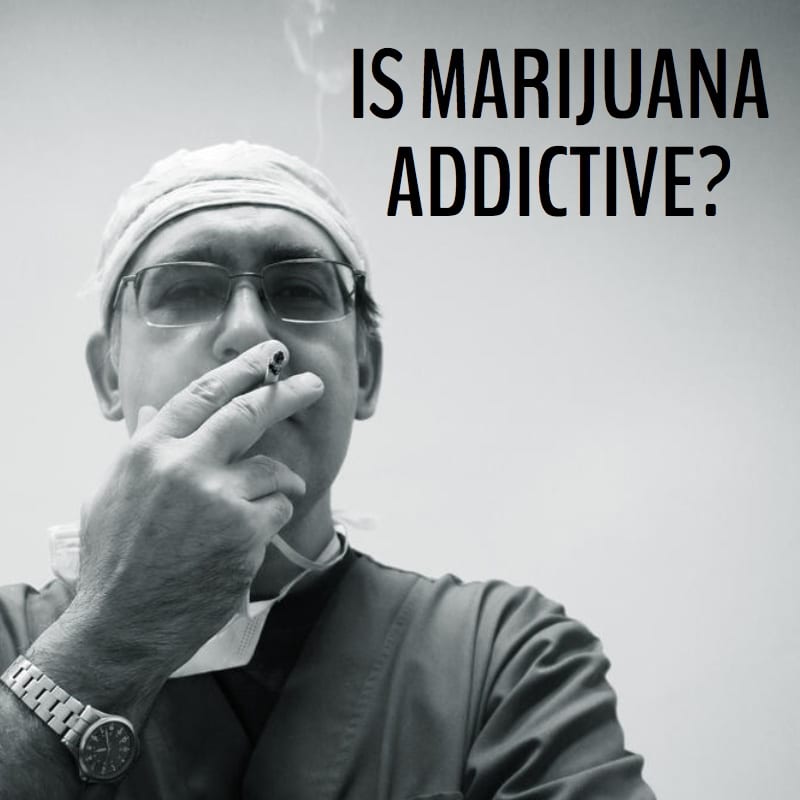 Yes, but not in the way some might mean. The question about whether or not marijuana is addictive comes in various forms. Will I experience physical withdrawal symptoms if I suddenly stop marijuana? Is there anything to the idea that I might be psychologically dependent on a drug?  Could I quit if I wanted to?

Some people and groups that are in favor of medical marijuana or a broader legalization or it for recreational purposes argue that because marijuana does not have dramatic withdrawal symptoms like alcohol or heroin, therefore, it is not addictive. But there are two errors to this thinking. One is that the marijuana of today is more than two times stronger than it was twenty years ago (some studies show much stronger than that), and withdrawing from that is quite a different matter. The other is that it is simply not true: There ARE withdrawal symptoms when a chronic user stops using marijuana. Those symptoms can be irritability, insomnia, anxiety, nightmares, anger, fluctuating feelings; headaches, depression, loss of appetite and a craving to continue the drug.

These symptoms can be stronger or weaker for the person withdrawing, depending on how much marijuana he was smoking, how long, and his own unique physical and mental constitution.

Even though the physiological effects of marijuana withdrawal are generally mild, it is not correct to conclude that marijuana is not addictive, because being addicted to something is more than simply being physically dependent on a drug and experiencing physiological effects if the drug is stopped suddenly. “Addiction” refers to behaviors that are compulsive, partially out of control or worse, and often escalating in severity and intensity.

Marijuana use disorder becomes addiction when the person cannot stop using the drug even though it interferes with many aspects of his or her life. Estimates of the number of people addicted to marijuana are controversial, in part because studies of substance use often use dependence as a proxy for addiction even though it is possible to be dependent without being addicted. Those studies suggest that 9 percent of people who use marijuana will become dependent on it, rising to about 17 percent in those who start using in their teens.

In 2015, about 4.0 million people in the United States met the diagnostic criteria for a marijuana use disorder; 138,000 voluntarily sought treatment for their marijuana use.

What are the odds of becoming addicted to marijuana? Studies have shown that of all the people who use marijuana, about on in eleven will become addicted. When a young person begins smoking marijuana in his or her teens, there is a one in six chance of the teen becoming addicted.

According to the Substance Abuse and Mental Health Services Administration, more than 360,000 people were admitted into treatment in 2010 for addiction, with marijuana as the primary drug of choice. Twenty-eight percent of those admissions or 103,000 people were between twelve and seventeen years old. (This figure applies only to publicly-funded facilities so the actual number is much higher.) Forty-three percent were under 21.

Because of greatly increased potency, mental distress, panic attacks and other problems have also increased. In 2011, there were nearly half a million visits to ERs related to problems with marijuana use. Common symptoms were severe nausea, vomiting, high blood pressure, anxiety, panic attacks and paranoia.

With the advent of marijuana becoming legalized in more states in the US for “recreational” use, these statistics will only become worse as people will perceive the Government’s authoritative “permission” towards marijuana as a “condoning” of its use. However, we are reminded in the Bible that while we have the freedom to do all things…not all things are profitable (1 Cor. 10:23). In other words, just because I can do it legally…will it benefit me in the end? The question God is wanting us to answer is…”Will I place my trust in marijuana to relieve my physical, emotional, spiritual pain and stresses…or in Him who knows me inside and out and who seeks and desires to give me His Peace that surpasses human understanding?”

At New Life Spirit Recovery, we stand on the Truth of God’s authoritative Word, which calls all people to love Him and walk in trust and dependence upon God for all our needs. Whenever we turn to anything that takes us out of a clear and sober mind (1 Peter 1:13) we step out of our God desired holiness and we open ourselves up to all kinds of temptations, evil influences and painful behaviors. It also is a statement of our faith level with God when we turn to something created by God or created by man to bring the comfort into our lives that only God Himself can and wants to provide. Whenever we do this with anything or anyone other than God…we dethrone God from our hearts and anoint our Idol as our new god.

We desire is to help our clients to learn and personally experience the heart of love that God has for them and how the One and True Living God can replace their dependency on marijuana, alcohol or any other substance with His all-powerful Love! When God’s love invades our hearts, peace prevails… freedom and joy reigns! After all…isn’t that what we’re all wanting? If you’ve tried everything else to kick your addiction…why not give God a chance at it this time?